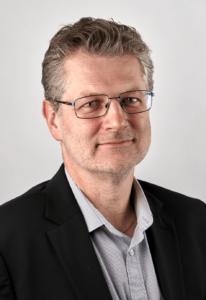 With a strong expertise in clinical research since 1993, Didier is passionate about the design of clinical research protocols and risk analysis processes. He started his career as data manager, at Wyeth Ayerst Research (Wyeth-Lerderlé), and quickly understood that being in contact with the medical world was really important. That’s why, he became a clinical research associate. Then international study coordinator at Pierre Fabre Oncology during two years before joining Laboratoires Théa in June 2002, where he was clinical trials manager in charge of world-wild clinical trials and then joined Théa Open Innovation in 2019 as Early Stage Medical Manager. Didier joined an Executive Education program and graduated as Doctor of Science from the Jean Monnet University in Saint-Etienne in September 2020, under the direction of Professors Gain and Thuret (BiiGC). Didier is also Managing Director of Fondation Théa, created in 2012. The Fondation missions are mainly to support trachoma eradication programs and educational programs in French and Portuguese speaking countries in Africa.

This website uses cookies to improve your experience while you navigate through the website. Out of these cookies, the cookies that are categorized as necessary are stored on your browser as they are essential for the working of basic functionalities of the website. We also use third-party cookies that help us analyze and understand how you use this website. These cookies will be stored in your browser only with your consent. You also have the option to opt-out of these cookies. But opting out of some of these cookies may have an effect on your browsing experience.
Necessary Always Enabled
Necessary cookies are absolutely essential for the website to function properly. This category only includes cookies that ensures basic functionalities and security features of the website. These cookies do not store any personal information.
Analytics
Les cookies marketing sont utilisés pour effectuer le suivi des visiteurs sur les sites Web. Le but est d'afficher des publicités qui sont pertinentes et intéressantes pour l'utilisateur individuel et donc plus précieuses pour les éditeurs et annonceurs tiers.
Language
Les cookies language sont utilisés pour afficher le site dans la langue de votre choix.
Save & Accept
Go to Top